Thistle - Ex Ambulance to...... well hopefully something else

Full Member
Introducing Thistle our low mileage (for an Ambulance) van conversion project.
I will start by saying I was primarily looking for an Auto so anything would have done.
Over the last few months I have watched and waited for something under £10k to come along and sure enough eventually one did. 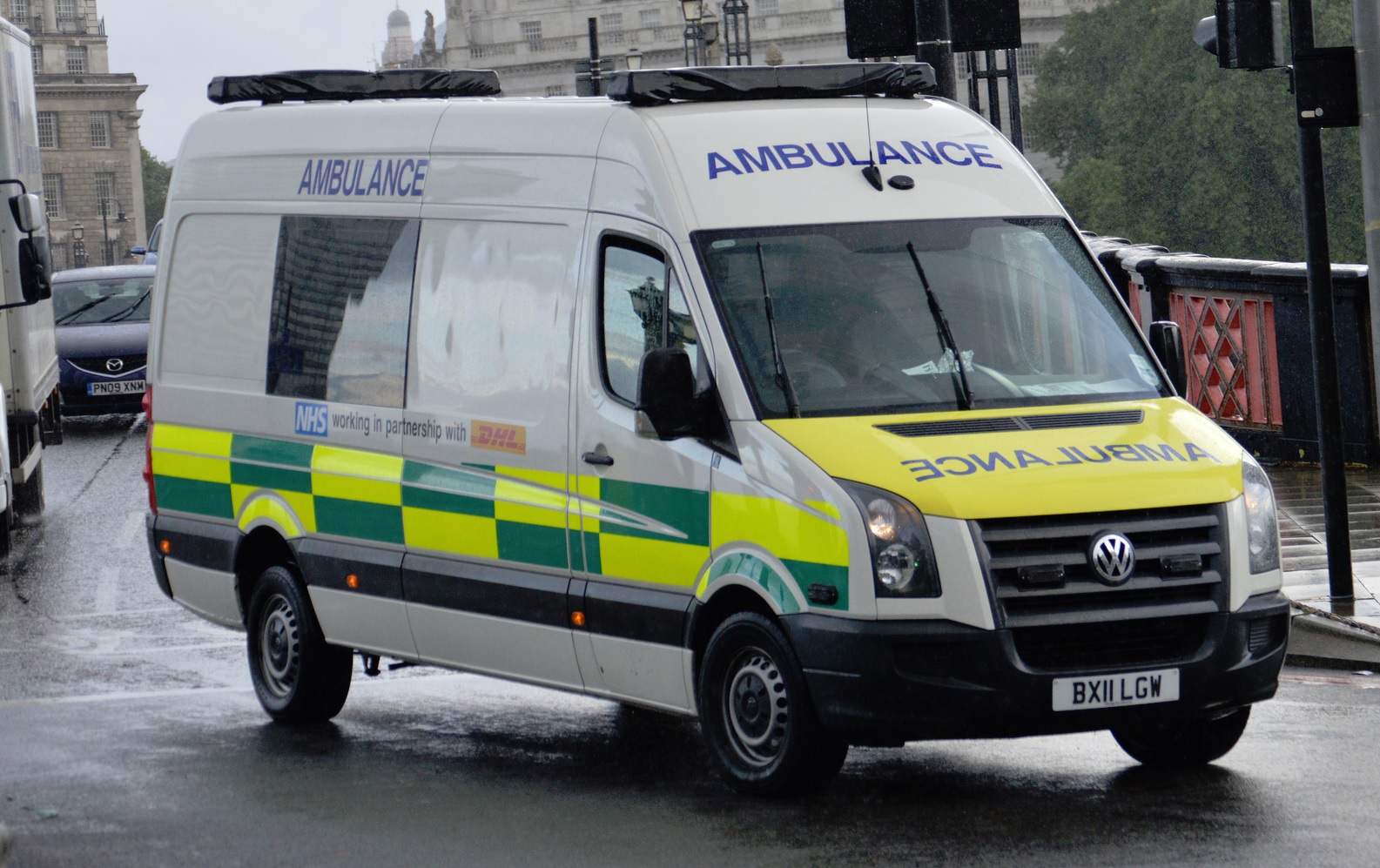 Thistle is an uprated (by SVtech) Crafter, 4000KG on the weight plate 3850KG on the V5.
Fitted with just about the right amount of windows including rear wipers and HRW, Air assist rear suspension, Side step, Espar aircon and D4, an 1800W Inverter, single passenger seat & some very well made (and secured) overhead lockers
Those are the bits I will be keeping but I will be stripping everything out and starting with a clean slate.


Thistle has been properly decommissioned and I bought him looking like this:

PS
I was intending to buy a Ducato and until recently I kept several Ducks as well (very tasty) hence the user name!
Last edited: Nov 9, 2018

Full Member
About me
My name is Keith, I am 58 a soon to be retired IT Project Manager, but my background is in Engineering.
I served a four year Indentured apprenticeship with GEC Avionics 1976-1980 as an Instrument Technician I then spent 13 years working as an Electronics test engineer mostly on military flight computers before moving into IT field service then management then as an IT Director and for the past few years as a freelance IT PM.

I live in North Shropshire with Karen and still have two of my three sons here, Peter and Alden, David my second son is at Salford Uni.

Business has been good and I can afford to retire earlier than planned, I had intended to stop at 60.
Hence Thistle will be the first of several projects I have planned for the next year or three (garden redesign, lots of new drains, big pond etc.) so I am going to be busy.

I own a small holding I keep Sheep & Chickens we have three dogs one of them is trained as a (semi) flock guardian.

I used to be the technical moderator for the Rover 75&ZT owners club we had several meets in my field which were very successful so I might, in the future, open it up to the occasional passing wild camper van.

I have done the odd thing or two, to vehicles over the years, auto to manual conversions etc. I have owned several 75s and ZT including 2 V8s, my last ZT was this blue one (K22) a Mk1 V8 with a KB blower running a 9 PSI pulley (about 400 BHP) which was limited by what the gearbox could take.


I sold it a couple of years ago and was persuaded to go semi green we now own a Kia Soul EV and a BMW F11.
I have to admit I really like the EV!

However I have never done a Van so its going to be a first for me.
Fortunately there are some superb resources on YouTube to reference, Greg Virgoes for example is probably the benchmark though.

I will post updates as the work progresses, not a lot will happen initially though other than tinkering and some prep.
I will be stripping the van out first then tackling the mass of ex ambulance electrics most will be redundant but not all.
The headlight strobe function for example may be worth keeping.

I also intend to fully service it first and I want (need) to raise the roof of my Car Port by about 3' so I can get it under cover alongside my workshop which I will be doing Mid December before any build can start properly.
Last edited: Nov 12, 2018

Full Member
Looks fab but only problem i can see is the windows which look single skin,you require double skin windows or thermal covers for the ones you have,other wise you will be drowned in winter.
Do put up more pictures as you go,first thing get the electrics and wires in where you want them for usb charge points tv and all the other clap trap,good luck.

Full Member
That’s a nice looking base van! Good luck with your build and post plenty of pictures please

Full Member
@trevskoda yep lots of single glazing to deal with:
Off side window is probably going to be completely obscured by a Shower room and Wardrobe/Fridge cupboard, Karen does not want the fridge at floor level.

So I may completely insulate over that one, It does break up the slab side of the van nicely though.
If so then I only then need to manage the solar gain and heat loss on the nearside and rear

Those windows are going to be secondary glazed probably using stuff from these guys
https://www.tubeway.co.uk/easyfix-diy/magnetglaze.html

being magnetic my thinking is they are removable, I could also then easily sandwich thermal covers between them as well when required and they will also double up as blackouts at night. If we (Karen has the say on this one) don't go for curtains then we will also be buying some Cassette Blinds.

I have a Awning on my shopping list plus I could simply park that side out of the sun, view permitting obviously but for limiting solar gain, & more likely, for having somewhere undercover to remove muddy boots then dry/park 3x wet dogs in Wet Welsh Wales is I think why an Awning is going to be mandatory
Last edited: Nov 9, 2018

Full Member
Hi and welcome,
You’re chosen a great van to start with, it will have been well looked after.
Insulation is a must the ambulance won’t have enough in it now !
Good luck with your build and have fun with it.
Darcar.

Full Member
Evening and welcome
We did a Ducato minibus aka bonded glass we’ve never had a problem with condensation!! Though our roof vents a permanently vented plus we have thermal cassette blinds from the salvage caravan we used for the build. Where we didn’t need a window we just blocked it up with insulation then boarded over it.
L H

Our Renault Master passenger ambulance has bonded windows and we did the same as LH by insulating and boarding off the ones we didn't need. Made our own internal silver screens for the ones we left uncovered, using doubled silver/bubble insulation edged with binding and fixed with suckers from ebay.

Full Member
@Darcar
I have pulled back some of the white plastic panelling and dropped one of the speakers out of the ceiling it has what appears to be standard loft insulation and not a lot of it so I will be stripping it all back to a bare shell and starting that from scratch.

There ares some serious bits of plywood in the walls behind the plastic panelling which I hope to reuse.

Full Member
Today has been a, I wonder what that does or where does that go day!
Basically the mysteries of Ambulance electrics.

I started by removing the auxiliary and engine batteries unfortunately some muppet fitted an AGM as the auxiliary and it probably has never been properly charged ever, it is only 18 months old but completely shot a shame really I could have used for my tractor.

The engine battery seems ok though.

I then removed the inverter and all the large cables between the Inverter & the Batteries plus all the related heavy duty cables and several inline Mega Fuses.

I have identified the Intellitec Battery Guard 2000 200A 12V unit which I will be relocating & keeping.
https://www.intellitecmv.com/collections/battery-guards/products/battery-guard-2000-200a-12v

And the headlight strobe controller which I will investigate tomorrow

A Wolf Elec WTM 3000 Intercom as shown here and that site includes a handy wiring diagram just in case I ever decide to reuse it.
http://www.whadusay.com/whadusay_2-way.html

An Adverc A1128-L 12-24 DC to DC Charger which was used to charge the Stretcher
https://adverc.co.uk/products/dc-dc-chargers

A Whelen Alpha 12X Siren Amplifier so for a bit of fun:

Full Member
@Pudsey Bear
I am reasonably ok with the odd bit of wood, time will tell if that translates to this project though
The van has 86,000 on the clock, and yep I had forgotten to add a signature to my profile.

Full Member
Most vans require to be striped back to the flesh as to speak,mine was the same as i bought it from a well meening home come convert chap who had no idea of what he was doing,there were more nails than would build ten houses and wiring that looked as if a 5 year old had been at it with length twisted together consisting of house wire and bits of speaker wire,it also leaked like a sive as he drilled holes in roof to bring tv cable in but no seal was used,some mothers do have them.

Good luck with selling that Ramp! there is generally little interest in them - I couldn't even give mine away and in the end had to disassemble it to make the bits light enough to cart away to the recyling centre.

Full Member
Ok first challenge how on earth do I release the pretensioner connector on the seat belt? the orange clip seem to slide back but then what does the green bit pull out the back or up or? 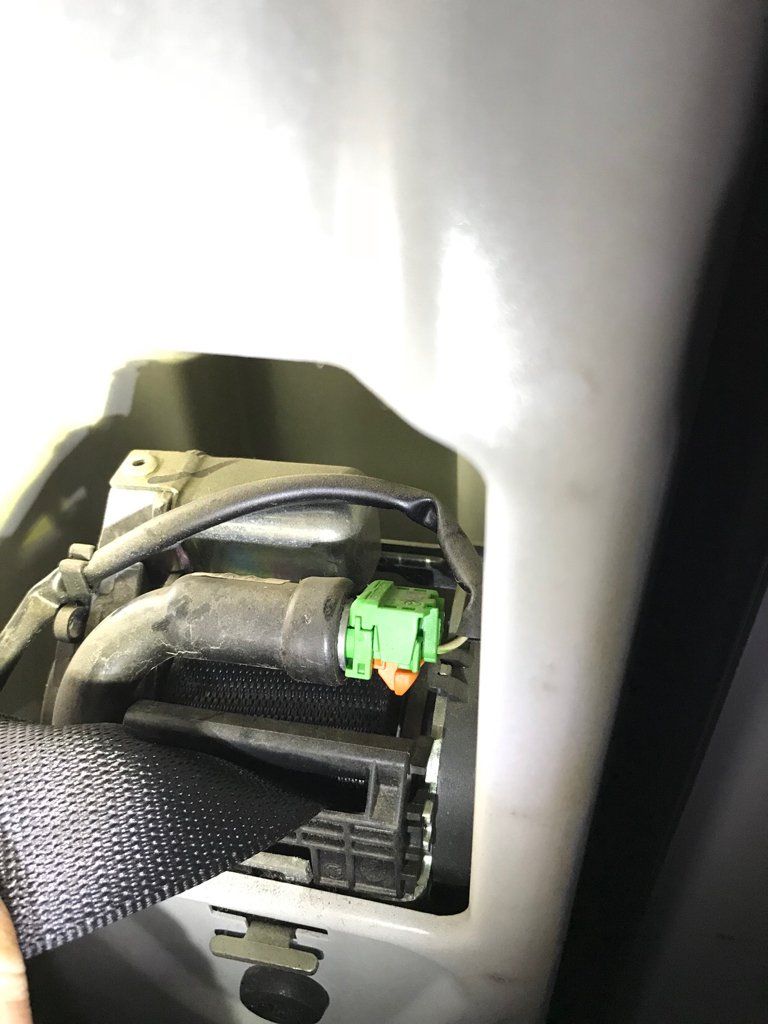 Full Member
Sorted I was not pulling hard enough!
Once the orange catch is slid back the entire thing pulls out with a firm tug.
Now I can soak the webbing for a day or three in detergent and hopefully return them back to red again.

Good luck with selling that Ramp! there is generally little interest in them - I couldn't even give mine away and in the end had to disassemble it to make the bits light enough to cart away to the recyling centre.
Click to expand...

Yep I think you are right probably why so many get left in situ, after all if they had a decent value sellers would remove them first.

If I keep it I think I can come up with a plan for mine involving re purposing a spare caravan chassis I have in my field.
Caravan Chassis are quite useful I bought a couple of damp caravans a few years ago and built something vaguely similar to this (using Stokboard instead of Metal) on one of the bare chassis

Full Member
Iv seen it all now.
You must log in or register to reply here.